It has been reported that former Real Madrid president Ramon Calderon has sympathy for David de Gea over his Manchester United stand-off. 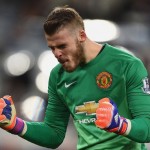 Talks of a move to Real have stalled as United seek a deal for Sergio Ramos.

“They have contracts so they can’t say they won’t go, unless they have a good reason, like an injury,” said Calderon.

“It is like a game of poker, with David De Gea in the middle.”