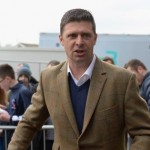 Reports are out claiming that Niall Quinn believes Jack Wilshere has once again gone too far with his post-FA Cup behaviour.

The Arsenal midfielder was filmed making expletive-filled remarks towards his club’s north London rivals Tottenham during the open-bus cup celebrations in the wake of Saturday’s 4-0 win over Aston Villa.

Last year, Wilshere acted in a similar fashion towards Spurs after the Gunners beat Hull City at Wembley and former Sunderland star Quinn suggests it is too much from the England international.

“It’s cropped up again. You want passion from your players, there’s no doubt about that, but he has overstepped the mark once more,” he told Sky Sports News HQ.

“I think most Arsenal fans and fans of any club love to interact with players and love to feel their passion but he has pushed the boat out too far once again. He has been reminded of his responsibilities.

“He’s a player who has much talent and he has been talked about for a lot of other reasons beside his football talent. Once again, we are doing it here when it should be a great day or two.

“I think he has to retain that passion for his club but not to cross the line and mock Spurs the way he did or the way he got the fans to do. He has to act a little bit better from now on.”