Reports are out claiming that David Beckham has given his former side Manchester United the vote of confidence in their quest to regain their renowned trophy-winning form. 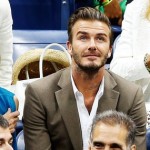 Since Beckham’s former boss Sir Alex Ferguson left his post as manager at Old Trafford two years ago, United have failed to win any silverware and this season’s chase for a title was thrown into doubt when they suffered a comprehensive 3-0 defeat to Arsenal at the weekend.

But Beckham has backed manager Louis van Gaal to take United back to their winning ways and is confident his old team can return to their former glories.

Promoting an upcoming charity match for UNICEF at Old Trafford, Beckham said: “There were a couple of seasons where we didn’t win things, we ended up with the FA Cup but not doing well in Champions League and the Premier League. So these things do happen at clubs. We’ve been spoilt over the years at United — being so successful over the last 20 years.”

“When the manager leaves and [chief executive] David Gill leaves [in the same summer] and a number of players stop playing and retire, like [Paul] Scholesy and Giggsy, no matter what club it is or how much money you have behind you, there’s going to be a dip in trophies. Unfortunately when you are Manchester united, you can’t really have that.”

“There are tough moments, and I think the weekend was a tough loss but, other than that, we seem to be slowly gradually getting back to some excitement.”

Manchester United Set To Take On MLS All Star Team