Reports are out claiming that former Arsenal attacker Paul Merson has criticised the club’s senior players after they were eliminated by Sheffield Wednesday in the League Cup on Tuesday night. 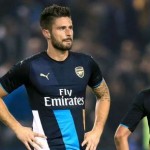 Arsenal were convincingly beaten 3-0 by Wednesday and Merson believes that the senior players in Wenger’s lineup let the younger players down during the defeat.

Wenger made several changes with many of his younger squad members given a chance to shine, but ultimately they disappointed as Arsenal were well beaten.

However, Merson was quick to place the blame firmly at the feet of the senior players that featured at Hillsborough.

Merson told Sky Sports : “The four or five older pros out there wouldn’t get four out of 10 so what chance have the youngsters got? I feel sorry for them,”. Szczesny Will Be Important To Arsenal For Many Years To Come! – Wenger