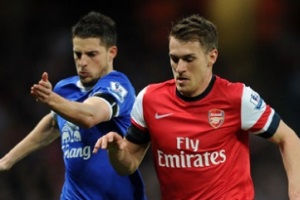 Arsenal will be without England midfielder Jack Wilshere (fractured foot) for Saturday’s FA Cup quarter-final against Everton. Wilshere is set to be sidelined for around eight weeks. France defender Laurent Koscielny faces a fitness test on a hamstring problem also sustained while away on international duty, so captain Thomas Vermaelen is on standby to deputise. Full-back Nacho Monreal (ankle) will also be assessed as manager Arsene Wenger looks to utilise his squad. Midfielders Aaron Ramsey (thigh) and deadline-day loan signing Kim Kallstrom (back) are stepping up their rehabilitation, but Theo Walcott and Abou Diaby remain long-term absentees.

Goalkeeper Joel Robles is set to continue his FA Cup run in the Everton side by replacing Tim Howard for the quarter-final tie at Arsenal. Captain Phil Jagielka is unlikely to feature having missed last weekend’s win over West Ham and England’s midweek friendly with a hamstring injury but fellow centre-back Antolin Alcaraz is fit again after six weeks out with a muscle problem. On-loan striker Romelu Lukaku is set to start having come off the bench to score the winner against the Hammers.