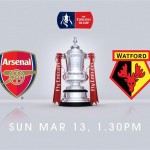 With all the drama surrounding Arsenal this season, it’s easy to forget that around this time of year they usually run out of players.

An injury list of seven was added to this week.

Centre-backs Per Mertesacker (clash of heads) and Gabriel (tight hamstring) both left the field before the hour at Hull City on Tuesday. Substitute Aaron Ramsey managed a 15 minute cameo before succumbing to a thigh strain.

Sunday’s Cup tie will be their seventh match in 21 days (with just one victory so far). Not ideal preparation for an eighth – in 24 – when attempting to claw back a 2-0 deficit in Barcelona.

Right now progressing in the Champions League is as unimaginable as failing to beat Watford is unthinkable.

The eight points between Arsenal and Leicester has again made the FA Cup a way of rescuing a season that promised more. If anybody is rested against Watford, you have to wonder what they are being rested for.