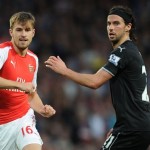 Arsenal have won their last five FA Cup ties against Burnley, scoring 16 and conceding just once. The one goal Burnley scored was in their biggest FA Cup loss since 1896 (Burnley 1-7 Arsenal, in 1937).

The Gunners have lost just one of their 40 FA Cup games against lower league opposition under Arsene Wenger’s management (W31 L1 D8).

Burnley have progressed past the fourth round on five of the last six occasions, though they’ve not reached the fifth round since 2011.

Burnley have won their last three away games in all competitions, scoring 10 goals and conceding just two.

Federico Marchetti Linked With A Move To Arsenal