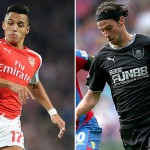 Tomas Rosicky could play for Arsenal for the first time this season and Francis Coquelin, out since November with a knee problem, could return.

Danny Welbeck, out for the past 10 months with a knee problem, is also close to a first-team return.

Former England goalkeeper Paul Robinson is set to be in the Burnley squad after joining on a short-term deal.