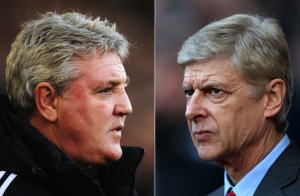 Arsene Wenger: I love to win. Your fans love you to win. Your fans will be happy when you win trophies. Look, it has become a way to think for everybody like that. If you look at the overall consistency nobody has finished in the Champions League in England for 18 years. Nobody. But it is true that because we are used to win every year, basically, and suddenly you don’t win, it becomes a way of thinking [for critics]. But you could go to some other clubs: ‘why did you not win the championship for 20 years?’ Nobody asks them the question. Having said that, of course, we want to win every year but it’s difficult.’’

Steve Bruce: “Everybody enjoys a shock and if you’re not an Arsenal fan I’m sure the rest of the world will be rooting for Hull. The reality is it’s a one-off, and it’s a place where heroes are made. Who can be that hero and go and win us the FA Cup? The memories of the FA Cup are the ones you cherish when you’ve finished your playing career. The ones you really remember are your FA Cup days and, believe me, it’s far better when you’ve won one than when you’ve lost one.”