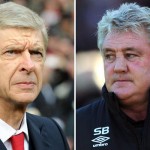 “The priority is the league and where we want to get to. We want to be playing the Arsenals and the Chelseas every week. But there’s nothing quite like an FA Cup tie or FA Cup run. Once it gets to this stage there’s all to play for.

“There are a whole raft of teams playing in the Championship on Tuesday – there’s a full fixture list. If we manage to get through then we will have to move our game on Saturday too, so the fixtures just pile up and that is a bit of a concern.

“Thankfully we have got everybody fit. Some of the squad haven’t played since the first game against Arsenal so it will be good for them.”

Arsenal manager Arsene Wenger, speaking about the game being arranged in the middle of a busy schedule for his side:

“We had no choice because the next round in the FA Cup is on Saturday.

“So we had to fit it in somewhere. Ideally it’s not the best position for us but I couldn’t see any other solution.

“I will have to [make changes] but I’m not so much concerned about replacing one player with another one. It’s more that I have to rotate a little bit and keep the right balance in the team.”