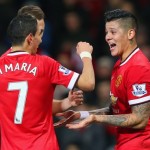 There are 54 league places between Manchester United (3rd in Premier League) and Cambridge United.

Luke Chadwick started a game at Old Trafford for the first time in over 13 years.

Man Utd and Cambridge had only ever met once before in any competition before this tie and that was the 1991-92 League Cup where the Red Devils won 4-1 on aggregate over two legs.

The 1991-92 season was also the last time Cambridge knocked a top flight team out of the FA Cup when they beat Coventry City after a replay.