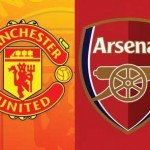 Striker Robin van Persie will miss the clash against his old club due to an ankle injury, and defender Jonny Evans will sit out after he was banned by the FA for six matches for spitting at Newcastle’s Papiss Cisse.

Arsenal defender Gabriel Paulista is out of the match due to a hamstring strain suffered in the 2-1 win over Queens Park Rangers. Wojciech Szczesny faces a fitness test following illness after missing the midweek win at QPR, as does Nacho Monreal (back) and Mathieu Flamini (hamstring). Gabriel has been ruled out for up to three weeks and joins Jack Wilshere (ankle), Mikel Arteta (ankle), Abou Diaby (calf) and Mathieu Debuchy (shoulder) on the sidelines.