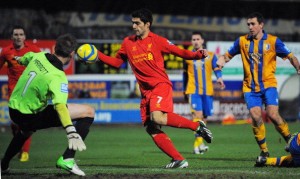 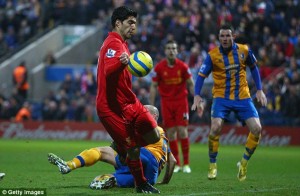 Sturridge, signed from European champions Chelsea, took just seven minutes to open his account on a rutted Mansfield pitch that looked more like a mudfield in places.
Suarez, who replaced the England striker in the 55th minute, made it 2-0 after just four minutes on the pitch but the goal triggered accusations of cheating after television replays showed the ball had hit his hand.

Liverpool manager Brendan Rodgers, however, played down the incident.
“There’s no doubt it was handball,” he told ESPN television of a goal that proved to be the winner. “Obviously what the referee and officials were looking at was that it wasn’t deliberate, which it clearly wasn’t.”

Neutrals hoping for a magical upset, in a David and Goliath clash typical of the world’s oldest knockout competition, were given hope when Matt Green pulled one back for the Stags in the 79th and Liverpool faltered.
The game ended with Liverpool under pressure, Green having a shot turned away in stoppage time and Exodus Geohaghon rattling the visitors with his immense throw-ins.