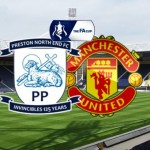 Jermaine Beckford will not have the chance to repeat his FA Cup heroics after being ruled out of Preston’s fifth-round clash with Manchester United at Deepdale. The striker played under Lilywhites boss Simon Grayson for Leeds and scored the winner in their third-round victory at Old Trafford five years ago, but he continues to be sidelined by an ear infection. Top scorer Joe Garner will fancy his chances of stealing the limelight this time round after scoring two goals against Chesterfield in midweek on his first start since picking up a knee injury in November.

Striker Robin van Persie is a doubt for Manchester United’s FA Cup fifth-round tie at Preston on Monday due to an unspecified injury. Left-back Luke Shaw returns from suspension, but centre-half Phil Jones is unlikely to play because of a knee injury he suffered against Burnley in midweek. Daley Blind went off in the win over the Clarets with a head injury but he should be fit for the game at Deepdale. Fellow midfielder Michael Carrick is out with a calf injury, though.