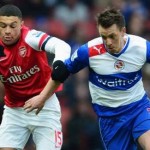 Reading have only ever made the FA Cup semi final once before, in 1927 when they lost to eventual winners Cardiff City.

Arsenal have participated in a joint-high 18 and won a joint-high 11 FA Cup finals each. This will be their 28th semi-final appearance (W18 L9) which is a record for an English club.

Olivier Giroud has scored seven and assisted four goals in his 12 FA Cup appearances and netted in two of his last three appearances against the Royals.

Arsenal and Reading have played each other 12 times in all competitions and the Gunners have won them all.

The last cup tie between Reading and Arsenal saw the Royals race into a four goal lead, only to be pegged back and eventually lose 5-7 in extra time.

The last three games between Reading and Arsenal have seen 24 goals scored.

Theo Walcott and Santi Cazorla have both scored four goals in their last two appearances against Reading.

The last time Arsenal lost an FA Cup semi-final to a team from outside the top flight was in 1973 against Sunderland.

Hal Robson-Kanu has scored in three of his last four FA Cup appearances, plus he also netted in his last appearance against Arsenal (30 March 2013 in the Premier League).

Reading have had opponents sent off against them in three of their four FA Cup ties (five games total) this season.

Arsenal’s last defeat in the FA Cup came against a lower division team (Blackburn Feb 2013) and the only team to avoid defeat in normal play since was also from the Championship (Wigan in 2014 semi final).

Only George Ramsay (6 with Aston Villa) has won the FA Cup as a manager more times than Arsene Wenger.

Each of the last three times Arsenal have faced second tier opposition in the semi-final they’ve gone on to win the trophy (1998, 2003 and 2014).

Arsene Wenger’s side have lost just one of their last 38 FA Cup games against a lower league side (W29 D8 L1), including the replayed game against Sheffield United in 1999.

Eight different players have scored for Arsenal in the FA Cup this season, more than any other side. Alexis Sanchez Prepared To Play In Any Position For Arsenal