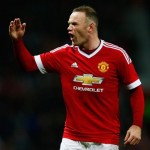 It has been reported that the Football Association is investigating a laser being shone at Manchester United’s Wayne Rooney during the League Cup defeat by Middlesbrough.

Television footage showed a green light appearing on Rooney’s face as he prepared to take his penalty following extra time.

The FA said it is aware of reports of the incident and is looking into it. Rio Ferdinand Ruled Out For Six Weeks With Back Injury