Fabiano : I Did Not Say I Want To Play For Manchester United 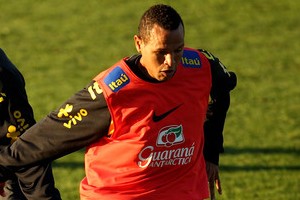 Brazil international striker Luis Fabiano has declared that he is prepared to stay with Spanish club Sevilla.

The Brazilian striker denies touting himself to Champions League rivals for next season.

Fabiano told reporters that : “I know you are saying that I have said I want to go to Milan or Manchester United, but they are phrases that have been taken out of context,”.

“I’ve always just said that it would be an honour to play for teams like Milan or Manchester [United],” he added.

“I’ve also said a lot of times that I would like to stay with Sevilla.”

Dawson : Ledley King Can Fill In For Rio Ferdinand