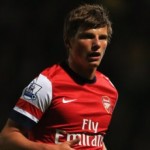 Arsène Wenger has made four changes to his squad for Wednesday night’s clash against Bayern Munich.
Lukasz Fabianski, Abou Diaby, Andrey Arshavin and Kieran Gibbs have all been included in the 18-man group for the Champions League last-16 second leg at Allianz Arena.

Jack Wilshere and Lukas Podolski (both ankle) have been left out, while Wojciech Szczesny has been rested. Meanwhile, Nacho Monreal is ineligible for the match, having represented Malaga in the group stages of the competition.