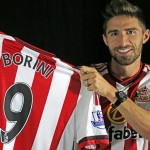 Reports are out claiming that Fabio Borini is thrilled to have finally completed his move to Sunderland from Liverpool.

The Black Cats signed the striker for a fee that could rise to £10million, completing the transfer on Monday.

The Italian previously spent the 2013-14 season on loan with the Black Cats and scored seven goals in 32 matches. He later rejected a permanent move to the Stadium of Light the following year.

The 24-year-old wrote on Twitter: “So happy and proud to be back playing @SunderlandAFC !! #HawayTheLads #Sunderland #9 #FB9 thank you.”