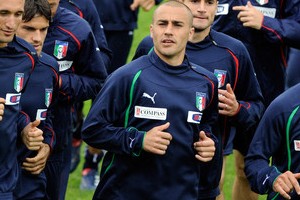 Italy’s World Cup captain is being linked with the Union, LA Galaxy and New York Red Bull as he comes off contract at Juve.

It was reported that Nowak wouldn’t go on record as saying the team is pursuing Cannavaro, but flashed that winning smile that has become customary when rumors have the makings of becoming truth and surmised, “This is big news, this is a big player.”

Cannavaro could move to the ‘States immediately after the World Cup.