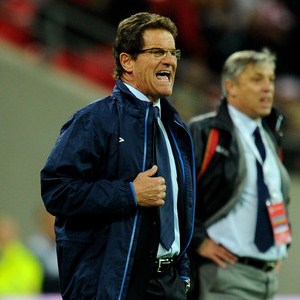 England manager Fabio Capello has defended Manchester United striker Wayne Rooney after the striker turned in a flat performance for the Three Lions in their 0-0 draw with Montenegro.

Wayne Rooney, who has been making headlines for the wrong reasons recently missed two chances and again looked out of sorts.

Capello however said: “Rooney played a normal game. He had two chances and twice the goalkeeper was very good, the second save was a fantastic save. We created four clear chances to score goals.”

Capello, however, did concede that England were fortunate when Milan Jovanovic hit the bar with a shot which had beaten goalkeeper Joe Hart.

“We were lucky because they had one shot at goal and it hit the bar,” Capello said. “In other games they have had two shots and always scored.

“This (Montenegro) team is a good team at the moment. They are a compact team, they work a lot. They are technically good.

“It is the fourth time they have had a clean sheet. It is not easy, you have to score quickly against them to make it easier.” Sir Alex Wants Anderson To Re-Establish Himself In Midfield