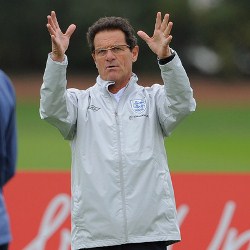 Reports have surfaced that Fabio Capello is high on Inter Milan’s short-list to take over from outgoing manager Leonardo.

However it is said that the England boss has no knowledge of the speculation linking him to the Italian giants.

Capello has spent the majority of his managerial career with Serie A clubs after previously guiding AC Milan, Roma and Juventus.

The 64-year-old is currently on vacation with his family in Spain and claims he has paid no attention to the reports coming out of Italy.

“I am in Marbella, in the sun, with my grandchildren. I am not aware of what is being said as in my house, my grandchildren have taken over the TV. They make the decisions regarding the TV and watch Walt Disney.”