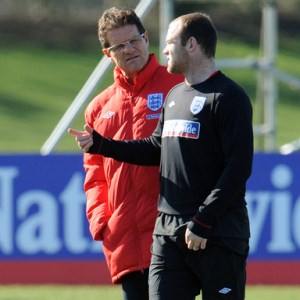 England boss Fabio Capello must be convinced that striker Wayne Rooney is in the right frame of mind to play against Switzerland.

The Manchester United striker is reeling from allegations about his romps with a £1,200-a-night hooker as England prepare for tomorrow’s Euro 2012 qualifier in Basel.

The troubled striker is expected to travel with the team this morning but boss Capello is talking to Rooney and monitoring the Manchester United striker’s mental state closely.

Rooney set up all four goals for England against Bulgaria at Wembley on Friday and seemed back to his best.

But the landscape has changed and there are serious concerns for Rooney among England staff.