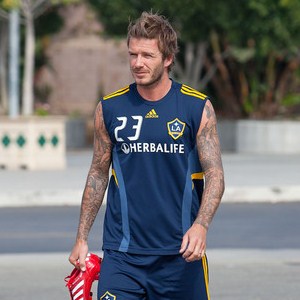 Sensational news are out and it has been reported that England coach Fabio Capello has performed a backflip of LA Galaxy star David Beckham’s international future.

The England boss called time on the former national captain during a TV interview and later claimed he would honour Beckham by picking him for a final tribute game at Wembley to say goodbye to the supporters who have idolised him over the years.

However the England coach has changed his mind and is willing to consider 35-year-old Beckham if he fully recovers from his Achilles injury.

Capello said: “The door is always open for all players.

“First of all David Beckham has to be back playing. We are monitoring all the players.

“At the moment I am thinking about the young players because they need more games and experience. We know the value of the older players. But although I think the future is about youth in the squad, no one player is out.”

Capello sparked a storm of criticism over his comments about Beckham, primarily because he hadn’t had the courtesy to call personally a man who had won 115 England caps.

However, Capello insists his relationship with Beckham has not been damaged.

He said: “I spoke with a journalist in the TV interview. Immediately after the interview Franco Baldini [Team England’s general manager] spoke with David.

“I also spoke with David on the telephone and I explained what really happened and the relationship between him and me remains really good.

“I spoke with David because he was a part of the staff in the World Cup. Usually I don’t speak on the phone with the players. But in this case I did.”

Monaco Keen To Secure The Services Of David Beckham