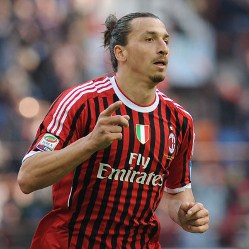 Fabio Capello is not surprised by the success Zlatan Ibrahimovic has enjoyed at AC Milan.

The former England coach worked with the Swede at Juventus.

“Ibra? I was the Coach who bought him to Italy [at Juventus],” he said.

“Ibrahimovic is one of the best in Europe. ”

“He’s a phenomenon thanks to his power, technique and quality. It’s very difficult to find a player of his height who is so agile.

“When he’s in the penalty area he scores or he creates a goal because he always has two defenders around him.”

For all of his ability, the Swedish international has been criticised of late for his aggressive comportment.

“There is something inside of him which makes him competitive on the pitch, because he’s a good guy off the field of play.” AC Milan In Contact With Real Madrid For Casemiro