Chelsea midfielder Cesc Fabregas has admitted that he has not spoken to Arsenal boss Arsene Wenger since his return to England. 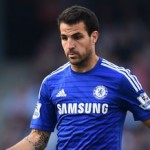 According to reports, Arsenal had the first option to buy Fabregas when Barcelona made him available at the beginning of the summer. But Wenger turned down the opportunity.

The two were in regular contact with eachother during his three-year spell at Barcelona, but since his move to Stamford Bridge the Frenchman hasn’t reached out to his former captain.

The Spanish international said: “No, he [Wenger] hasn’t spoken to me since I came back.

“It was the kind of relationship I always would have liked to keep.

“But I’m sure once everything dies down a bit in the future we will talk. There is no problem.

“I’ll always be grateful to him whatever happens.”