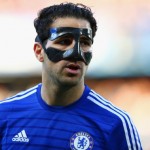 Reports are out claiming that Chelsea midfielder Cesc Fabregas is full of praise for Kurt Zouma after his man-marking job on Marouane Fellaini for victory over Manchester United.

The former Arsenal and Barcelona midfielder said : “If I played there normally I would struggle a bit more to deal with long balls and the physical aspect of the game,”.

“We had to put someone on Fellaini, especially for the long balls, so yes our style changed. I thought Zouma did extremely well.

“I think his future is as a centre-back but he can do the job very well in central midfield when it’s needed. He’s a top, top boy. He wants to learn, he wants to play.

“That’s why Mourinho is who he is and has won what he has won. The plan worked very well.”