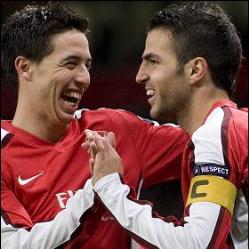 It has been revealed that Cesc Fabregas and Samir Nasri have been included in Arsenal’s Champions League squad for their play-off round tie with Udinese.

Press Association Sport understands the Gunners have named both want-away midfielders in their 25-man A-list for this month’s two-legged clash, despite intense speculation both are set to leave the Emirates Stadium.

Were captain Fabregas or contract rebel Nasri to feature in the contest, they would be cup-tied if they were then to complete respective moves to Barcelona and Manchester City.