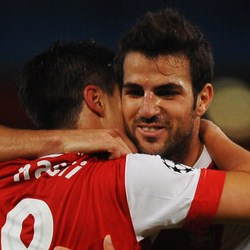 Arsenal captain Cesc Fabregas has revealed that he has been excited watching team-mate Samir Nasri this season. Fabregas is currently out of action with a hamstring injury.

In many ways the French international has taken on Fabregas’ own creative mantle and the Spanish international believes his team-mate has never played better.

Fabregas told the Official Arsenal Matchday Programme that : “I think Samir said it himself, but he’s in the form of his life,”.

“Perhaps he could have been playing the same way without scoring and people wouldn’t have noticed it as much, but now he’s getting goals too and for me he is one of those who are leading the team the most.

“It’s his third season here and sometimes it takes a while to settle in, but this season he’s been so regular in his form. His goals [against Fulham] on Saturday showed incredible composure and sometimes it’s all about confidence – when that’s high, you do things you might not be capable of if you’re not in good form.”