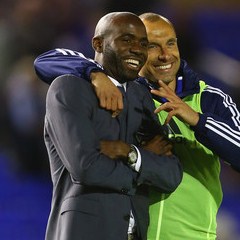 It has been revealed that former Bolton Wanderers and Arsenal midfielder Fabrice Muamba is keen on a role with FIFA.

The 24-year-old Zaire born midfielder was forced to retire from football after suffering a cardiac arrest during a match at Tottenham in March and is still yet to decide where his future lies.

He believes he is too impatient to become a manager and also claimed watching football can lead to him getting ‘very frustrated’.

But a job with the sport’s governing body could be on the cards after Muamba revealed he has been offered a chance to speak to FIFA president Sepp Blatter next week.

He said: “Funnily enough I have a meeting with Sepp Blatter this time next week. Hopefully he can get a job for me.

“I’ve been told he’s invited me to Zurich and hopefully we can sort something out. I don’t know [what], I have to go and see what happens.

“I will go and see him. Some time next week I have to fly to Zurich.”

Martin Petrov Linked With A Move To The MLS

Owen Coyle Pleased With The Performance Of Ryo Miyaichi Against Millwall