Reports are out claiming that Facundo Ferreyra has joined Newcastle United on a season-long loan from Shakhtar Donetsk. 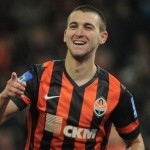 The 23 year old Argentinian struggled to get into the first team at the Donbass Arena last season following a move from his native Velez Sarsfield in July 2013, although he did manage to find the net six times from five starts, and had been linked with a move to Newcastle for most of the summer.

That has now been completed by the Magpies, who have the option to buy the striker at the end of the season.

“I like the Premier League and when I knew that Newcastle were interested in me, it was a very easy decision to make.

“I spoke to my friend Fabricio Coloccini, and when he told me about the club, I didn’t need to think twice.”