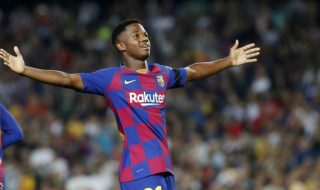 Ansu Fati… if you’ve never heard of Barcelona’s new superstar, you can be forgiven: until a couple of weeks ago, neither had the vast majority of the Spanish club’s fans.

But the 16-year-old has been thrust into the limelight after making history on Saturday, becoming the youngest player in La Liga history to register a goal and an assist in the same game.

Even more impressively, he needed only seven minutes to do so in his team’s 5-2 demolition of Valencia. Just 110 seconds had elapsed when he opened the scoring by meeting Frenkie de Jong’s low cross with a confident right-footed strike from 12 yards; five minutes later, he returned the favour by weaving his way into the box and picking out a precise pass for De Jong to convert.

Looking at the video below, we can clearly see the boy is a natural talent just like a certain Argentinian,

But Barcelona could be without Ansu Fati for a month if the striker is called up by the Spanish Football Federation (RFEF) for the U17 World Cup.The RFEF are optimistic of getting a passport for the Barcelona starlet in the next few days and could immediately call him up for the youth tournament in Brazil between October 26 and November 17.Fati himself has decided that he wants to play for Spain, even though he is also eligible for Portugal or Guinea-Bissau. Philippe Mexes : I Could Have Joined Real Madrid!