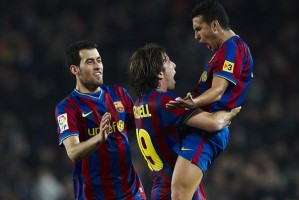 Barcelona suffered a scare, but battled hard to break down Malaga and keep their place at the top of La Liga with a 2-1 win.

The Spanish champions had gone ahead with a stunning strike from Pedro, who now has six goals this season, but were then pegged back by Valdo after he was sent clean through on goal by a great pass from Victor Obinna.

Lionel Messi restored Barcelona’s lead three minutes later though, finishing off a typical flowing move and Zlatan Ibrahimovic had a late goal ruled out for a foul.