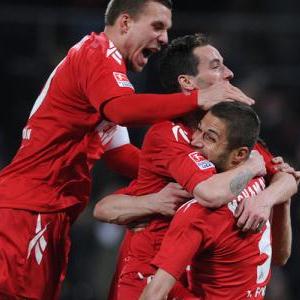 Cologne crushed Hannover 4-0 on with two goals from Slovenian Milivoje Novakovic to snap their opponents’ three-game winning streak and dash their hopes of moving into second spot in the Bundesliga.

Captain Lukas Podolski notched his 11th goal of the season and Novakovic scored twice late in the game after Portuguese midfielder Petit struck with a powerful free kick on 36 minutes.

Cologne, who were stuck in the relegation zone for much of the season, scored their sixth consecutive home win to move up to 10th on 32 points. Hanover remain in third place on 47.

League leaders Borussia Dortmund, on 61 points, travel to Hoffenheim on Saturday while second-placed Bayer Leverkusen, on 49, take on Mainz on Sunday.