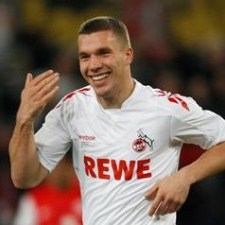 Reports are out claiming that FC Cologne striker Lukas Podolski has undergone an Arsenal medical.

The Daily Star reported that the German international striker had a medical yesterday, paving the way for Arsenal to snap up the £10.9m striker.

But Arsenal won’t stop there and are ready to splash even more cash to reinforce Arsene Wenger’s squad for next season. Arsenal Pleased With The Performance Of Thomas Eisfeld