It has been reported that FC Copenhagen have denied claims that they are set to offer Nicklas Bendtner a pathway out of England. 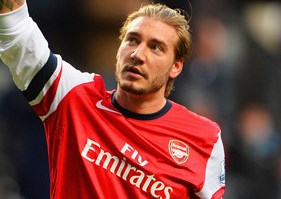 The 26-year old Denmark international striker is out of contract with Arsenal this summer and is almost certain to leave the Emirates Stadium as a free agent.

Reports have emerged that Danish champions Copenhagen are set to bring Bendtner back to his hometown after he watched the weekend’s 1-1 draw with Randers.

However, Copenhagen director Anders Horsholt has denied claims that his club is set to enter the race for the signature of the former Birmingham City, Sunderland and Juventus loanee.

“We are not talking about that,” he told reporters.

“He is in town and is an old Copenhagen boy, who during his childhood days (attended matches).

“He wanted to see some football, it isn’t anything more than that. Unfortunately, we couldn’t give him a win.”

This season, Bendtner has made just four starts for a total of 14 appearances in all competitions which has seen him score two goals for the north Londoners.