It has been reported that FC Goa manager Zico has implored his squad to learn everything they can from Robert Pires. 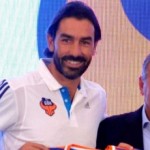 As the Gaurs, who are co-owned by Indian cricketer Virat Kohli, prepare for their first fixture against Chennaiyin FC on Wednesday, their Brazilian boss has urged them to observe their marquee player Pires.

Zico believes the 40-year old Arsenal great still has a winning mentality and is eager for his squad to be educated by such a successful player.

“I have told my players to observe Pires on the field. His skill, technique and temperament will be important to the side,” he said.

“I do not have a problem if they do not play well. But I do not want them giving me less than 100% on the pitch.”

During his career, Pires won two Premier League titles with the Gunners as well as the 1998 World Cup and Euro2000 with France.