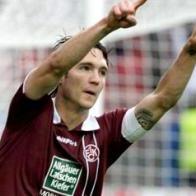 Kaiserslautern held off battling Werder Bremen to conclude a great first season back in the Bundesliga with a thrilling victory at the Fritz-Walter-Stadion.

Last season’s 2.Bundesliga champions have been one of this campaign’s the surprise packages, with three points today ensuring they finish in a highly creditable seventh place.

They took the lead through Adam Nemec on seven minutes before further efforts by Francisco Rodnei and Srdjan Lakic appeared to have the result decided inside half an hour.

But Bremen fought back, pulling one back through Torsten Frings just before the break and then, after Frings missed a penalty on 52 minutes, getting to within a goal when Marko Arnautovic netted.

The visitors failed to find an equaliser in what time remained as last year’s third-placed finishers slipped to another loss to end the campaign just three places and five points above the relegation zone.