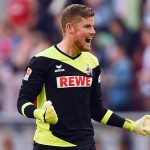 Reports are out claiming that FC Koln goalkeeper Timo Horn has opened the door to moving on this summer.

The talented shot-stopper has been linked with Jurgen Klopp’s Liverpool this season – and admits a move abroad is in his thoughts.

“I don’t want to actually leave FC. But everyone has dream teams.

“Real Madrid, Arsenal, Manchester United – if such a club should approach, I would think about it,” says Horn.