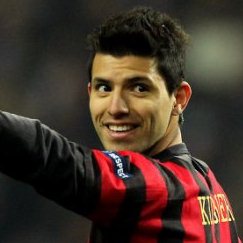 Sergio Aguero came off the bench to hand Manchester City a 2-1 advantage in their Europa League tie against Porto.

The Argentinian struck from close range with six minutes remaining as City came from behind to condemn the Portuguese champions to a rare defeat at the Estadio do Dragao.

The hosts took a 27th-minute lead in the first leg of the last-32 clash through Silvestre Varela but an Alvaro Pereira own goal gifted City an equaliser.

City, who may have been disappointed to be playing in the competition after their Champions League elimination, will now be confident of completing the job at the Etihad Stadium next Wednesday.

Any suggestions the Barclays Premier League leaders may not have been interested were dispelled as manager Roberto Mancini fielded a strong side.

They were up against strong opposition in a Porto team which won the Europa League last year and had not been beaten at home in a major competition all season.