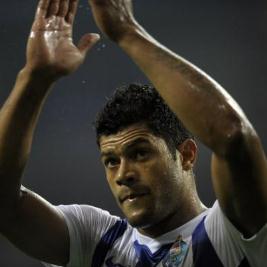 Hulk made up for missing a penalty to score a vicious free-kick as Porto came from behind to launch their Champions League campaign with victory over Shakhtar Donetsk in Group G.

The Brazilian hit the bar before seeing his spot-kick come back off the post, only for the Ukrainian champions to take the lead when Adriano pounced on an awful error by Porto goalkeeper Helton.

However, Hulk made amends when he sent an unstoppable shot past Olexandr Rybka with a little under half-an-hour gone.

Pinheiro Kleber then tapped home in the second half in a match which saw Shakhtar finish with nine men, Yaroslav Rakitskiy and Dimitro Chygrynskiy both given their marching orders.