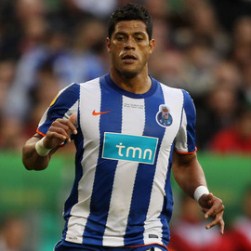 The president of FC Porto, Pinto da Costa, recently declared that he would not trade Brazilian striker Hulk for any player, including Real Madrid star Cristiano Ronaldo.

Hulk, now age 25, has been targeted by a number of clubs around Europe after an impressive season in Portugal.

He, along with Radamel Falcao, Alvaro Pereira, Joao Moutinho and Rolando have all been heavily linked with moves away from the Estadio do Dragao, but da Costa says it would take a monumental offer for the Portuguese champions to let go of their stars.

He told Porto Canal : “It may sound like a heresy, but I would not trade Hulk for Cristiano Ronaldo. It is my opinion, perhaps the coach will say different,”.

“If we consider Ronaldo’s price, we can consider that it is possible that someone pays €100m for Hulk.”