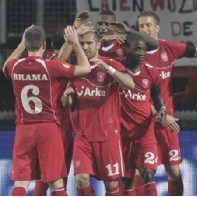 Fulham suffered a last-gasp 1-0 defeat to FC Twente as they wasted the chance to make the Europa League knockout stage.

The Cottagers knew three points in the Netherlands would guarantee qualification from Group K, but they ultimately claimed none as Austrian substitute Marc Janko stabbed home from close range.

Martin Jol’s side struggled against the club he played for between 1979 and 1982, failing to muster a single shot in a first half that Twente dominated.

Fulham’s poor first period was compounded by an injury to Damien Duff, although the west Londoners looked a more cohesive attacking unit after the restart.

Mousa Dembele limped off as Fulham pushed forward towards the end and Janko scored two minutes from time.

The win was Twente’s first against English opposition and things got worse for the Cottagers when Andrew Johnson was sent off in stoppage time, meaning he will miss the all-important final group match with Odense, which Fulham need to win to be sure of qualification for the last 32.

Jol named a strong Fulham line-up for the game as they looked to qualify with a game to spare.