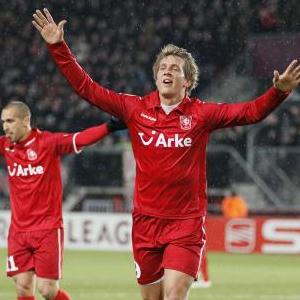 FC Twente coach Michel Preud’homme watched his side make a mockery of his pre-match comments by taking a giant step towards the quarter-finals of the Europa League with a thumping victory at home to Zenit St Petersburg tonight.

The Belgian had played down expectations ahead of the match by claiming Zenit belonged in the Champions League and branding his side underdogs.

But his players proved otherwise as a Luuk de Jong brace either side of a Denny Landzaat effort put them firmly in the box seat ahead of next week’s second leg in Russia.

At 2-0 down, the visitors might have still fancied their chances at home, but De Jong’s second deep into injury-time all but killed off their hopes.