It has been reported that FC Twente chairman Joop Munsterman is delighted to have beaten Feyenoord for Arsenal winger Ryo Miyaichi. 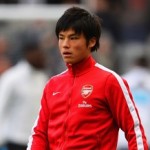 The Japan international has joined Twente on a season-long loan.

Miyaichi made his name in Europe after a superb six months with Feyenoord two years ago and was also interesting the Rotterdam club.

“We just needed to be sure with his medical,” confirmed Munsterman last night. “We’re very pleased.”