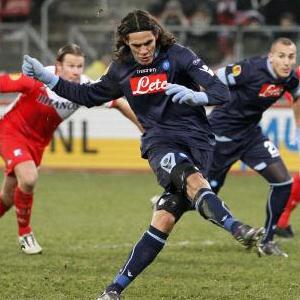 FC Utrecht and Napoli left themselves with difficult tasks to progress from Europa League Group K after restricting each other to a point apiece.

Both sides headed into the encounter winless and two points behind second-placed Steaua Bucharest with two games remaining while Liverpool topped the standings.

However, Edinson Cavani’s hat-trick rescued a draw for Napoli and meant the sides shared the points, while Steaua and Liverpool drew to leave three teams fighting for second place.

The final round of matches sees Napoli scrap it out with Steaua – the winner there would almost certainly progress – while Utrecht face a daunting trip to Anfield needing victory and hoping for a draw between their rivals.