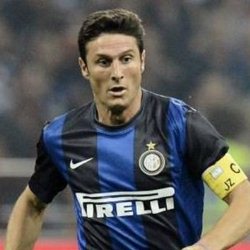 Javier Zanetti made his 800th appearance for Inter Milan in the Italian side’s 2-0 win at Romania’s Vaslui in a Europa League play-off tie.

The 39-year-old Argentine began his Inter career 17 years ago, playing in a 1-0 Serie A win over Vicenza on August 27, 1995, after joining from Banfield, an unfashionable Buenos Aires club.

Since then he has won five Serie A titles, four Coppa Italias, one Champions League, one UEFA Cup and one Club World championship.