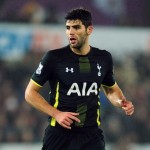 Tottenham defender Federico Fazio has declared that they go to Manchester United on Sunday full of confidence.

Spurs travel to Old Trafford on Sunday on the back of two consecutive Premier League wins over Swansea and QPR.

The Argentine international said: “Winning both games has been very important for our confidence.

“To win those two matches after the Cup Final [defeat to Chelsea] was very important and now we need to keep going.

“We are in a good position to stay in the running for the European places and maybe be up there on the final day of the season. We’re fighting with a number of good teams but I am confident.

“Of course, we have a very difficult game at Manchester United next but we are in a good way going into this match and we need to win.”