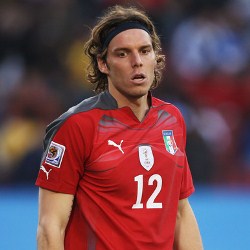 According to the agent of Cagliari goalkeeper Federico Marchetti, the Italian international is set for a move to Lazio.

The deal appeared off after Cagliari offered the 28 year old last week to AC Milan.

Agent Beppe Bozzo told Radio Radio : “There has been a handshake with Lazio President Claudio Lotito,”.

“I think that, at the end of the day, the move to Lazio will happen and our position has not changed,” he added.

“We have a deal with Lazio and all they have to do is pay the €5.2m rescission clause in his contract before the end of August.

“However, I think that Marchetti’s future will be resolved a lot sooner than that.”