It has been reported that Fulham boss Felix Magath was pleased for his players after their 1-0 win over Newcastle United. 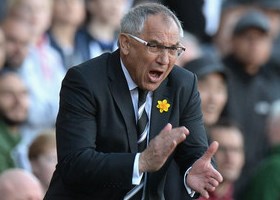 Ashkan Dejagah struck eight minutes after coming on as a second-half substitute to give Magath his first win as Fulham boss at the fourth attempt in Newcastle’s first match since Alan Pardew’s headbutt of Hull midfielder David Meyler earned a three-match stadium ban.

“I do not care much about the other results,” Magath said.

“It was not only the result today. We were the better team.

“It will give us the confidence that we can avoid relegation and stay in the league.

“I’m convinced that we can manage it and stay in the league. After this game and this victory I’m more than convinced.”